So we are here now, living in England.  It has been about a month and a half.  So far we have been able to rent a house, explore a little bit of our surrounding area, and begin to settle into our new home.

It has been a whirlwind of activity and when I look back to share with everyone what has been going on I don’t even know where to start?

So I guess I will start with arrival day.  After a 10 hour red eye flight from Las Vegas, Nevada to London we arrived at about 3:30 pm England time. 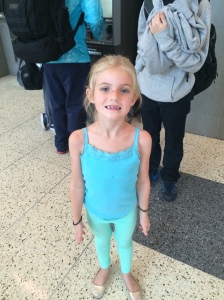 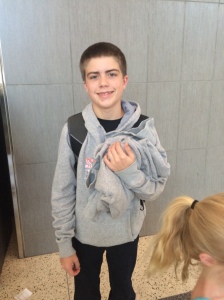 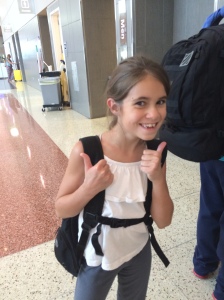 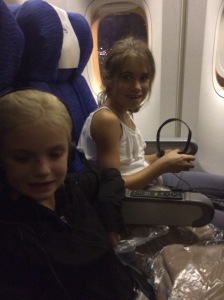 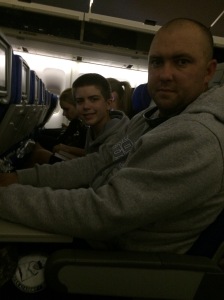 We arrived to sunny skies and temperatures considerably cooler than the 100 degree days we had just left behind in Vegas.  We proceeded through Immigration and Customs without any problems and were thankfully met by a very nice driver ready to drive us to our temporary housing near Portsmouth, England.  As he expertly drove through the crowded streets surrounding the airport.  I immediately went into panic mode seeing the all of the foreign signs, roadways, and drivers driving on the wrong side (to me)!  It was kind of like what the heck did we just decide to do?  It’s not like visiting another country, we chose to uproot our entire lives to live here for the next three years without the comfort of a base close to us or anything.  Just us.  I felt dread overcome me.  On the other hand Mike and the kids passed out asleep after the long flight seemingly without a care in the world with the comfort that we had made it safely to this new country. 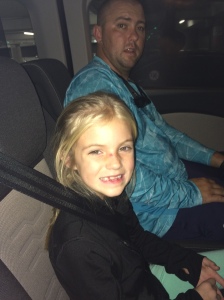 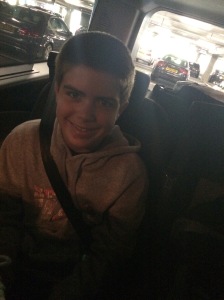 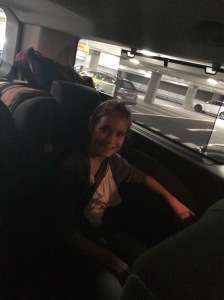 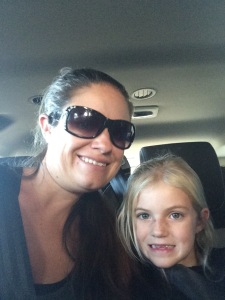 After about a two hour drive we pulled up to our temporary housing.  Upon entering we found that we were truly not alone in this strange place.  There on the counter in the kitchen was a note from a fellow Coastie wife welcoming us.  Along with leaving us some much needed groceries, she left us directions to the nearest store, and a couple of food places.  Thank goodness for our Coast Guard Family.  You never know when they will be there ready to help even with never having met you.  It was just what I needed to see.  That we truly weren’t alone.

After that we did our best to feel at home in our temporary housing.  We walked to the store almost daily to fill our tiny fridge.  We explored the local neighborhood and ate at some of the local restaurants.  We had our first meal of fish and chips there and our first English BBQ on the 4th of July.  We also branched out a little bit and explored Portsmouth and South Sea a couple of afternoons.  It was a great place to settle into this new country slowly. 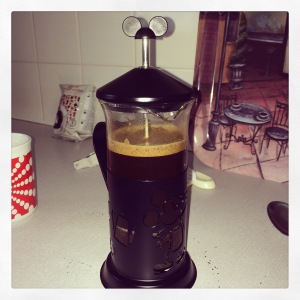 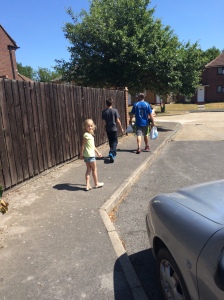 Must walk to the store:) 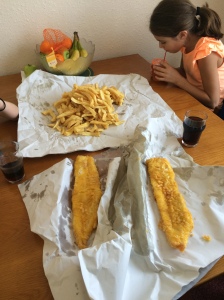 Our first In Country Fish and Chips 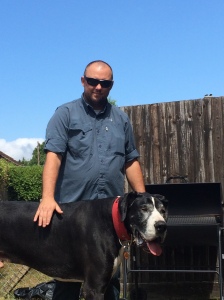 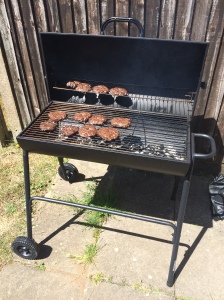 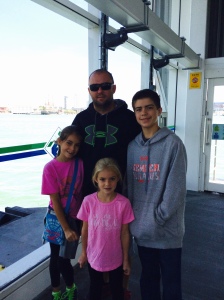 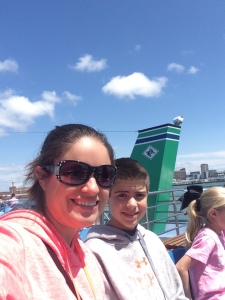 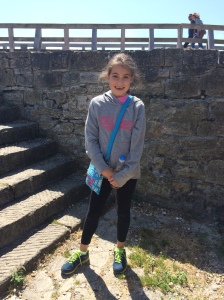 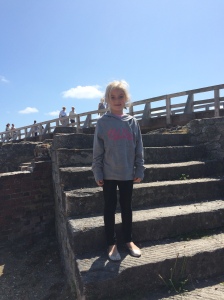 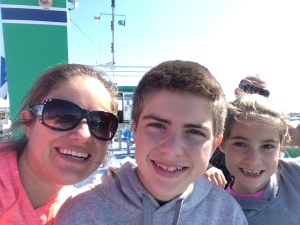 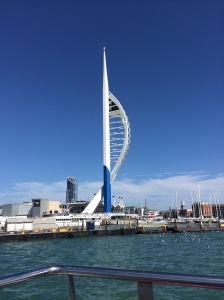 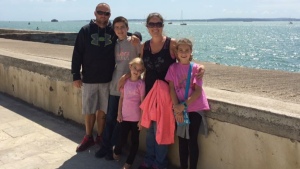 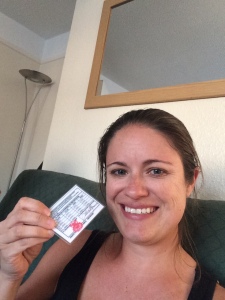 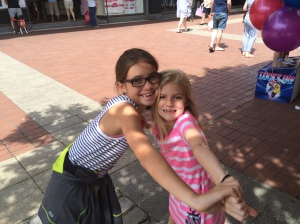 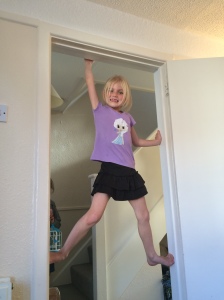 My youngest climbing the walls, literally in our temporary house.

Of course while settling in we still had to attend to daily life.  Which included setting up bank accounts in order to spend money over here.  We mostly survived by using the local atms (cash machines or hole in the wall here in England) and just budgeted everything to the last pound.  But nothing is more disheartening than pulling out 100 pounds and it costing you $170 with the conversion rate and fees.  We had to be very money conscience and really get used to converting in our heads to make sure we didn’t overspend.

Then the fun of house hunting started.  Thankfully as soon as we mentioned that Mike is working with the Royal Navy they were willing to work with us.  The hardest part of house hunting at this point was not having access to a vehicle.  We shipped our car from the US but did not have it at this point (and as of right now still don’t have it).  Getting on the bus or public transportation with 5 people can get pretty expensive quickly even with family rates so Mike had the job of going to see all the houses we picked out from the internet.  We did not rely on a real estate agent or letting agent here to help us find a house.  We made appointments at each house individually.  After a short search we found the house that we are in now.  And after a relatively painless process we moved in about 2 weeks later. 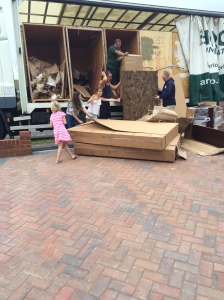 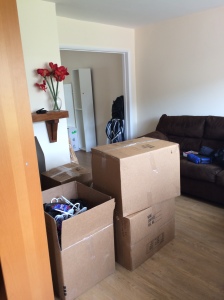 Now we are in the house and settled.  Our household goods have arrived and we finished unpacking rather quickly since we left a lot of things back in the United States in storage.   We are still getting accustomed to the English way of life.  We are still caught off guard with something almost everyday.  But thankfully all of the people we have met over here are willing to explain everything to us (sometimes twice) so that we can understand what is expected of us.

We have tackled public transortation, Mike has accomplished driving with a borrowed vehicle, setting up in Country bank accounts, and are planning our first mini-holiday to London in October for my birthday.  All in all we are doing pretty well and now that some of the more vital things we have to do are done we look forward to having some fun. 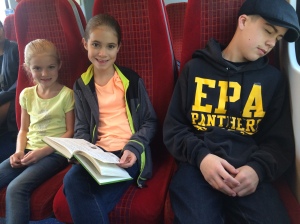 The most important thing we still need to accomplish is enrolling the kids into their respective schools.  We did the applications and are now just waiting on a response.  Hopefully we will be hearing from them in the next 48 hours and then it is on to school shopping:)

We are looking forward to living here and the dread I felt upon arriving in country are completely gone.  Well, except for the weather but that’s a whole different post!!!

2 thoughts on “First 6 Weeks in England”